The second decade of the new century is characterized for HCT by stability under the musical direction of Bert Willemsen, a slow growth in the number of members and the successful use of new digital tools.

From the anniversary concert in 2012 to mark its 90th anniversary, HCT will from now on hold its spring concerts in the beautiful theater hall De KunstGreep in Oostzaan. In search of a suitable location for that anniversary concert, De KunstGreep turned out to be an excellent and (perhaps unexpectedly) affordable venue. The audience is in a real theater hall with good seats, the musicians have the space on a large stage and are supported by good technology for light and sound. Afterwards, there is an opportunity in the theater's bar for the audience and members to have a drink. The only drawback is that the theater is not located in the old familiar Tuindorp. In order to maintain the connection with the neighborhood, the Christmas concerts are therefore still held in the Bethel Church as ever. From 2015 there is a second Christmas concert in the Maria Magdalenakerk in Zaandam on the Friday evening before the Christmas concert in the Bethel church; a new tradition is born. 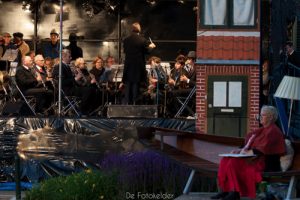 In 2013, the Volksopera Tuindorp Oostzaan will be held, a grand spectacle, a real opera on the Zonneplein on two evenings in June, where mainly amateurs from the area give a moving performance with the main theme of Tuindorp Oostzaan's relationship with the NDSM. A love story between a Tuindorp girl and a Turkish migrant worker is the storyline. Of course the organizers could not ignore HCT, so that the band lends its musical cooperation to this opera; another memorable performance despite the frequent rain showers on one of the evenings. 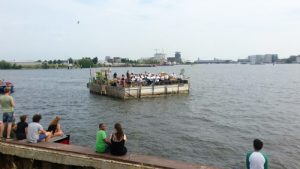 In the summer of 2016 - the summer holiday has actually already started - a special performance: on a raft HCT is sailed past three catering locations at the former NDSM yard (Ceuvel, Noorderlicht and Pllek), where three times half an hour of music is made from that raft. . A special experience that is the cherry on the cake for a music association. 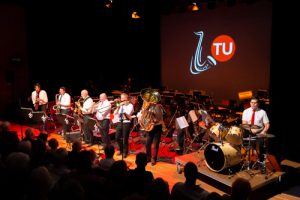 From 2017, HCT has a "house band" under the name On A Tuesday, a small group of members that plays swinging music at the initiative of Jesse de Bruyne, who writes the arrangements and also composes their own songs. At the spring concerts, they fill part of the program with modern music, which the audience is sure to appreciate. 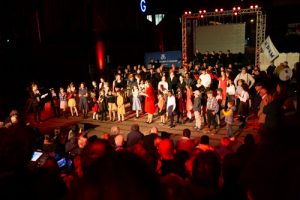 In 2019 HCT is participating again in a special project, the production The Yard on the Move in the NDSM yard on the NDSM site. It is a theatrical performance with dance and song, mainly performed by young people, with the link between shipbuilder NDSM and Tuindorp Oostzaan as the common thread - which is why HCT should not be missing here.

In collaboration with Cultuurhuis Noord, a cultural initiative to bring some life back to the Zonnehuis, which unfortunately turns out to be short-lived, HCT will once again be giving recorder lessons from 2014. The recorder is still an accessible instrument for younger children to start with music. Especially in the beginning the lessons are very accessible for the children and some choose a different wind instrument after the recorder and then move on to the beginners band and sometimes even main band. It remains a fragile initiative: after a few years the registrations diminish, only rarely do the recorders prove to be here to stay. Nevertheless, the recorder class has given some new enthusiasm for recruiting new members and for giving music lessons at the association itself: in addition to clarinet lessons, flute lessons are now also given in rehearsal room De Rank, which appear to meet a need. Children and adults know where to find these lessons.

In addition to its own website, HCT has also been active on Facebook since 2014. The website will be completely renewed and is of a professional level and also easy to find on the worldwide web. People looking for a music association in Amsterdam soon find themselves at HCT. This good findability and the good information on the website undoubtedly contribute to a steady growth in the number of members. At the beginning of the decade, HCT has about 50 members in total and 40 members in the main band, by the end of the decade this has increased to 65 members in total and 50 members in the main band.

Website manager Hans de Bruyne is also responsible for the beautiful films that can be seen in the background during the concerts and for the recordings of the concerts, which can then be seen on the HCT YouTube channel, which also received the necessary positive attention for the association.

The presence on all these digital platforms proves to be a powerful magnet for the registration of potential new members.

In order to be future-proof, a slow shift is taking place in this decade towards a younger administration. Old-timers make way for the younger generation: Melvin Kuipers becomes chairman, Vincent van Leeuwen treasurer, so that the future of the association is safeguarded at the administrative level.

The possible threat of problems with the subsidy is also averted. From 2018, the Amsterdam Fund for the Arts (AFK) will provide subsidies for amateur art; a biennial subsidy always provides the necessary financial basis for our association.

And then suddenly in 2020, social life in the Netherlands almost comes to a standstill. The outbreak of the new coronavirus Covid-19, which has turned out to be highly contagious and deadly, has resulted in many activities being banned from mid-March. HCT is also forced to stop rehearsing and performances are canceled, including the spring concert in May that would be dedicated to 75 years of liberation. Halfway through the year it is unclear what the future will look like. Will it be possible to rehearse again, can concerts and performances continue, and in what form? If the 1.5 meter society becomes a reality for a longer period of time, what does this mean for music associations? Suddenly everything is uncertain.