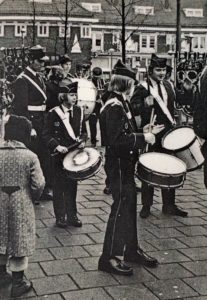 HCT was unable to maintain the high level of the 1950s and 1960s. The decline in membership was difficult to stop; a member recruitment campaign in 1966 among primary schools in Tuindorp failed: no response was received, neither from new members nor from the teaching staff.

For HCT, all this meant that musical performance declined. During the competition in Hoofddorp in 1968, no first prize was won for the first time in years, although according to the orchestra the first prize was definitely deserved.

In 1969 a recorder class was started under the direction of conductor Brouwer; 26 children registered for this. It was an attempt to win children over to the association at an early age. The number of orchestra members was still 38 in 1969, the drum band had 18 members. That year there were sixteen performances, including one launch at the NDSM.

In 1970, participation in a competition in the Concertgebouw in Amsterdam resulted in a second prize. As a result, HCT was relegated to a lower division, the Honorary Division. Characteristic of the situation at that time was that HCT had to fail to launch the Shell tanker "Marticia" at the NDSM due to understaffing.

In order to be able to provide the necessary performances and thus bring in money for the association, the farmers' chapel was founded in 1970, which was quite successful at carnival and other parties in the following years. ; the bugler section, which in 1969 still consisted of seven men, disappeared completely from the scene. The drum band consisted of only nine drummers and a number of students.

In the years prior to the anniversary, a number of shows with well-known Dutch people were given for a sold-out Zonnehuis. In 1970 there was a show in April with André van Duyn, Ria Valk and Frans van Dusschoten and in August the Joop Doderer show drew people en masse to the Zonneplein. In 1971 there was the Rita Corita show in August and two try-outs of shows were organized in collaboration with the theater agency of Joop van den Ende from Tuindorp: in February the show 'With a smile in the space' and in September the Ted de Braak show. 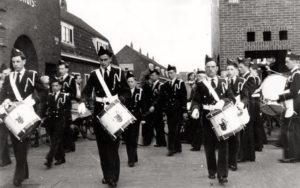 On 28 May, HCT organized a Bond Mars competition on Zonneplein with the participation of fifteen bands. The organization is running fine and HCT itself obtains a first prize and thus receives the exchange prize for a year in the concert band department.

December 9 is the celebration of the 50th anniversary. HCT's drum band and orchestra give a nice show in the Zonnehuis, while the evening is completed by a large number of artists: Tony Eyk, Eddy Christiani, the Loland Trio, Saskia and Serge, Frans Vrolijk and Ria Valk.

In the meantime, the recorder class, started in 1969, was a great success. Some recorders had already chosen an instrument and became students of HCT. A youth orchestra was even founded in 1972 to promote the flow of recorders and students. How uncertain working with youth is, however, was shown in the years that followed. In 1976 there was no longer a recorder class at all and a year later the youth orchestra was also disbanded due to a lack of viability.

The same yo-yo movement could be seen at the May 4 commemorations, to which HCT had always cooperated. Social developments also gnawed at this tradition. In 1971, for the first time, there was no longer a silent march through Tuindorp prior to the play at the monument. In 1972 and 1973 there was no more musical cooperation requested from HCT. In 1975 and 1976, there was only playing at the monument and from 1977 there was another silent march on May 4 and there was played at the monument, a tradition that continues to this day.
In marching competitions HCT also remained very strong during this period. From 1971 to 1975, a first prize was won at Bondsmars competitions; in 1975, "even the great Tram harmony" is referred back to second place in a competition in the Spaarndammerbuurt. Notable events in 1975 are also the participation in the closing evening of the manifestation 'Mokum 700' in the RAI and the livening up of the championship of Rood Wit A, which takes place after weeks of delay when the football club finally wins a decisive match and becomes champion of becomes the main class.

The farmers' chapel led by Henk Wooldrik was meanwhile busy with performances during carnival time. Sometimes there were three performances in one night; a regular tour was made from De Bult to café Het Sluis and then to the Volewijckers. Nevertheless, the farmers' chapel also made a name for itself and even played in the Hilton hotel with Willy Alberti and Mini and Maxi when they said goodbye to footballer Sjaak Swart.

In 1979 the NDSM gave financial support to HCT for the last time. In the same year, HCT finds the other shipbuilder in Amsterdam-Noord, the ADM, willing to become the new patron and to support the uniform fund. However, this support would be very short-lived; the ADM would also soon go bankrupt.

End of the drum band

The orchestra still had about 40 playing members in the late 1970s and early 1980s. In competitions a second place was always achieved, which resulted in the fact that after the competition in Ede in 1982 they were relegated to what was then still called the First Division, but was later called the Department of Excellence.

There was a memorable performance on May 5, 1980 at the Westermarkt, where HCT cooperates in bringing in the Canadian liberators.

In 1982 the 60th anniversary was celebrated. A flea market brought in the necessary money; Mr and Mrs Ruiter in particular, who also collected waste paper for years, made every effort to this end. During the anniversary concert on 27 November, the new uniforms were put into use: the blue uniform from 1952 was exchanged for a sober brown out-fit. Cabaret performer Peter Faber from Tuindorp gave a one-man show and the evening ended with a fun ball. The well-attended reception fourteen days later showed that HCT was still in the spotlight.

In the early eighties there was again a considerable influx of students, so that in 1984 a student orchestra could be formed again under the direction of Nelis Smit. The weekly rehearsal evening shifted from Friday to Tuesday.

In 1985 an era came to an end at HCT. Conductor Brouwer silently said goodbye on 1 June according to his own wishes. He had been conductor of HCT for 33 years, Brouwer was succeeded by Peter Tol and in 1990 Peter Tol was succeeded by Ruud Pletting.