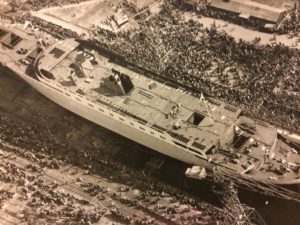 "Everything in Amsterdam and the Netherlands looks at us. We are a healthy, thriving association that has a reputation, but that reputation will have to be preserved. This is not easy, but it is worth fighting for, 'then secretary P. Storm wrote in the 1961 annual report. People were proud of his association, but they also realized that a thriving association was not something that would exist without The support of the NDSM was a big plus for the financial policy of the association. Yet the debt of 10,000 guilders to the NDSM dating from 1951 also had to be repaid. The income of HCT came from the membership fees, contributions from the donors, paid cooperation and from collecting old paper. The latter was a source of income that HCT certainly could not do without, but which remained a source of concern over the years. The biggest difficulty was the fact that there was no private club room for the storage of the old paper. A warehouse was rented, but because of the fire hazard, this was a great risk for those to whom this happened. 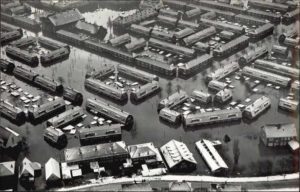 Flood and 40 year anniversary In January 1960, the flood disaster in Tuindorp Oostzaan took place. HCT was hit hard by this. The entire music library and part of the archive were lost. An amount of 7077 guilders was needed for the repair of instruments; HCT got this amount back through the insurance and the disaster fund. The first rehearsal of that year could not be held until April 1. In 1960 there were only 25 musical collaborations; in the preceding years this was about forty a year, with the exception of 1954, in which no fewer than 54 collaborations could be noted. During this difficult period, the solidarity of other music associations became apparent, which donated pieces of music or gifts for the purchase of instruments or music.

1962: 40-year anniversary In 1962 HCT celebrated its 40th anniversary. To get the necessary money in, a lottery was held and a Flemish fair was organized from 29 June to 2 July in a large tent on the Plejadenplein, a kind of fancy fair.

The highlight of the anniversary celebration was on December 15, when a reception was held in the afternoon and the gala concert took place in the evening. The association was showered with gifts. The gala concert was a great success; During this concert, the then secretary P. Storm performed a piano concerto about which Jan Vermaak, conductor of the music association Amicitia, wrote at the time in the Noord-Amsterdammer : 'It was also a revolutionary idea to perform a piano concert feed. That this thought should become an act is already a special merit. Richard Addinsell's Warsaw concert was performed by Mr. P. Storm, the orchestra arrangement was provided by Mr. A.P. Kwakkestein. This arrangement showed craftsmanship, because the task was difficult in order to obtain a transparent whole. The arranger has completely succeeded in this. The soloist performed this concert superbly technically. We were struck by the fact that the orchestra accompanied decisively and did not drown out the solo playing. "

Highest musical level The growing quality of HCT was translated in 1963 in a resounding result at the KNF music competition in Aalsmeer. With 110 points and praise from the jury, HCT was promoted to the highest division, the Vaandel division; along with another corps, this score was the highest in the entire country in the entire year. Another highlight in 1963 was the participation in the Airborne walking tour with a trip to South Limburg for two days.

In the following years HCT managed to maintain itself at the musical top with verve. In 1964, Wormerveer took part in a marching competition, where HCT achieved the highest number of points of all associations during the entire year. When participating in a competition in Hilvarenbeek, the orchestra maintained itself in the Vaandel department: a first prize was won with 103 points, which also included the presentation of the Federation flag. In 1964, the last payment of 500 guilders was paid to the NDSM and they helped to celebrate the Tuindorp cyclist Jaap Oudkerk, who became world champion behind the motorcycles in that year.

In 1965 during a competition in Krasnapolsky in Amsterdam a first prize was again won with 100.5 points; this added a pennant to the Federation banner.

In 1966 both drum band and orchestra won first prize at a competition in Loon op Zand. Also in 1967 HCT maintained itself with ease in the Vaandel department by winning a first prize with 105.5 points at the competition in Heerewaarden. 'Neverita', conductor Brouwer was introduced to Princess Margriet and the association received an extra gift from the NDSM of 1000 guilders.

Conductor Brouwer HCT's great successes took place under the direction of conductor Koen Brouwer. From 1951 to 1985 the musical direction was in his hands, with a break of a few years in the early 1950s. Brouwer was also solo clarinetist in the Police Chapel. In the background of these successes, however, a number of developments took place that foreshadowed the more difficult period in which HCT would later end up. Membership slowly declined. In 1954 there were still 61 members playing in the orchestra and 42 in the drum band, by 1968 this had decreased to 39 orchestra members and 31 members of the drum band.

In addition, the position of the NDSM became less bright.

At HCT it was realized that the support of the NDSM would not be eternal and that one would therefore have to draw more from another important source of money, the paid contribution. However, the number of collaborations also declined slowly but surely.

A financial windfall in those years was the start of the so-called "subsidy concerts" in 1967: the Amsterdam Bond obliged the associations to give a number of concerts per year, for which the association would receive a subsidy. In 1967 HCT received 2000 guilders for this.