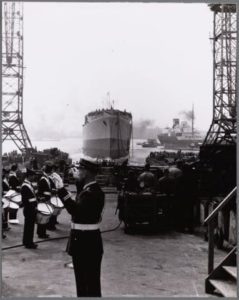 Economic crisis and war A few months after the 10th anniversary, Meijns stepped up as a conductor; he was succeeded by Klaas Schut, who had previously observed Meijns a couple of times. He came every day from the Westzaan bike every rehearsal evening. After a successful competition in the mid-1930s, he was offered a new bicycle on behalf of the club on a festive evening. The economic crisis of the 1930s did not go unnoticed by HCT either. Many members became unemployed and the financial obligations could be met with difficulty. To add some extra money, some younger members took the initiative to set up a show band under the name Harmonie Boys. On the eve of World War II, HCT achieved a great result in the department at a competition in Putten in 1939. Excellence: with the highest number of points from all competitors, the association won a first prize, also an honorary prize; Also in the marching competition HCT was awarded a first prize. The musical road up was cruelly disturbed by the outbreak of the war. A number of members had to under arms and later to Germany for the Arbeitseinsatz. The annual meeting in January 1940 showed that the debt of the instruments was fully satisfied. ‘I could embrace Mr Van der Woert with joy, that he had passed this heavy pressure from our shoulders due to his economical policy’, according to then chairman L. Ooms in the Gedenkboekje at the 40th anniversary. “We also agreed,” continues Ooms, “that whatever might happen in the future, Harmoniecorps Tuindorp should stay together.” In the beginning of the war rehearsals were regularly held, but later the club life was very low level; there was little contact between them. However, in 1942 a successful party was organized at the 20th anniversary. There was also a collaboration with fanfare Veni, Vidi, Vici to be able to bring together a representative orchestra. In August 1944 an important event took place for HCT. In honor of the 50th anniversary of the NSM (Nederlandse Scheepsbouw Maatschappij) a sports party was held on the Volewijcker site, for which HCT was invited to provide the musical accompaniment. The welcome was great, there was even a meal of pea soup and brown beans offered, exceptional cost in those hungry years. HCT chairman Ooms was asked by NSM director Goedkoop about the state of affairs at HCT and promised help: ‘Chairman, I was already partially informed about Harmoniecorps Tuindorp, but now I know a lot more and I call it an achievement. The war can not last long anymore and afterwards we talk to each other ‘, recalls Ooms in the Gedenkboekje their conversation. Bottom in the war was the fusillation of HCT member Jaap de Vries, according to the older members probably because of the fact that he was still walking in the street after the curfew.

When the war finally came to an end after five dark years, HCT immediately marched through Tuindorp; sign that it was not done with the association. 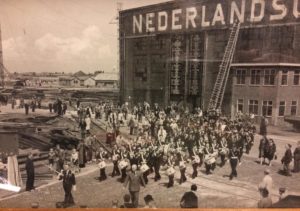 Connection with NDSM The contact that had been made in the war with the NSM resulted in a long-term cooperation with the NDSM (Dutch Dock and Shipbuilding Company) after the war, a merger of the NSM and the Dutch Dock Society. In 1946, the then director of the NDSM, Feike de Boer, became patron of HCT. The NDSM was going to support HCT financially, while HCT would entertain any new launches of new ships. The cooperation laid a solid foundation under the club life, which had an unprecedented flourishing time. 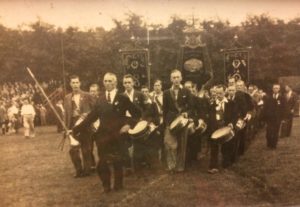 The drum band After the war, the drum band was also started, of which Ferry Knaack took the lead. The official formation of the drum band was in 1948. The drum band had a great attraction to the youth of Tuindorp, who immediately felt like participating in the drum band. The fact that study was also necessary for good play was sometimes forgotten in the enthusiasm of youth; if the fun then became less, the young people sometimes soon gave up. Traditionally, the membership of the drum band was larger than with the orchestra. In 1952 HCT was invited to give musical support to the exhibition ‘De Rijn’ in the RAI, on the occasion of the opening of the Amsterdam-Rijnkanaal. Condition, however, was that one would act in uniform; a representative appearance was needed, because in the end Queen Juliana would open the exhibition. Until then, HCT had always played in civilian clothes. An amount of 28,000 guilders was required for the purchase of uniforms. This amount was raised thanks to the support of various companies and donors and other inhabitants of Tuindorp Oostzaan.

Marching instructor Ferry Knaack From 1945, the HCT drum band has been led by Ferry Knaack for 25 years. "And we have always won first prizes for 23 years," said Knaack. Day and night Knaack was busy with the drum band: writing music, repairing drums, conducting rehearsals. "It was a really good time, we had a lot of fun. Everyone always wanted to be on the drum band's bus at competitions. The biggest success I found was a competition in St. Maartensdijk; we were called professionals there! "Due to a lack of time, Knaack quit the drum band in 1970.