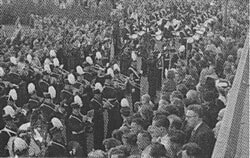 The first launch at the NDSM to which HCT cooperated was in 1947 and concerned the motor vessel ‘Bougainville’. The members who did not work at the NDSM could not work because they paid the wages that they paid from the NDSM. After every launching, people were welcomed to drink and cigars. In the 1950s, HCT granted its support to around seven launches per year; in the beginning of the sixties this went down to three or four per year. The launch of the ‘Vasum’ in 1955 by Princess Beatrix can still be remembered by many, because many photographs were made that were popular among the members. The financial support of the NDSM was indispensable in those years. For the purchase of instruments in 1951, the NDSM had advanced an amount of 10,000 guilders interest-free. The repayment of this debt was a constant concern for the treasurer, but without the NDSM the investment in instruments could not even have taken place. This was even stronger for the maintenance of the uniforms and for the purchase of uniforms for new members. “The registration of a new member for the association means an investment of almost 1000 guilders (an instrument of 500 to 600 guilders and a uniform of about 300 guilders) is a fact that people usually do not realize,” wrote the then chairman A.J. ten Nijenhuis in the Gedenkboekje on the occasion of the 40th anniversary in 1962. In 1957 NDSM director De Boer retired. The new patron of HCT then became his successor A.A. van Donkelaar. From 1959 the association received an additional amount of 150 guilders for each launch. On 15 December 1961, HCT was of course also present when the 100th ship built by the NDSM after the war was launched: the Esso Lincoln. In total, HCT would also cooperate with more than a hundred launches.

In 1954, HCT joined the Royal Dutch Federation of Harmony and Fanfair Societies (KNF) to participate in the first World Music Competition in Kerkrade in August of that year. The participation in this Music Competition became a highlight in the history of HCT. The day before the actual competition in Kerkrade a Swimming Show was held, a demonstration in the light of spotlights with musical accompaniment. ‘An old lady sitting on the side of the water suddenly fell off her couch and dipped her head under’, wrote the then secretary F.J. Hania in the 1954 annual report. “She was rescued by a member of ours, Mr. A. Kwakkestein, who without a moment’s thought suddenly jumped into the water and took the lady out. He had borrowed a uniform from another member, in which, as if nothing had happened, the demonstration began to play a part in the orchestra. ‘ There are also other versions in circulation of this rescue action: for example, the water in which the unfortunate lady fell would have been only forty centimeters deep. At the march competition in Kerkrade, the orchestra with drum band pushed through to the final. Together with another band, HCT won the first prize in an international company. It was a great achievement of which images could be seen in the cinema in the Polygoon-news. It is striking that members who have experienced Kerkrade consider it one of the many highlights of the fifties and sixties are not the highlight. In that time, Marswedstrijden were a discipline in which HCT consistently scored high. ‘We were so good in the field of Mars that we were blasé of success at a given moment,’ says Henk Wooldrik. ‘With that drum band too: we went away and no grin nervousness; we would take the highest number of points, and that was the case every time. ‘

‘We always won first prizes with the drum band. We were once on a competition with the drum band and the harmony in Roermond. We had to march at 10 o’clock in the morning. Jan Braaksma and Ab Wals had swayed the night before and only started at 11.00. Then we already received the first prize with the highest number of points. Can you tell us: we did not even need the two prominent drums. “(Henk Wooldrik) At a certain point in time, the number of playing members had risen to over one hundred: in 1954 there were 61 people in the orchestra and 42 people in the drumband. The number of donors fluctuated around five hundred at the time. The size of orchestra and drum band made HCT an impressive appearance on the street when it comes to marching. The people had to take a step back and stand on the sidewalk when HCT came by. At the Bloemencorso, which was participated for years in succession, five men had to walk side by side because with four men next to each other the length of the corps would become too large and it would take too long for the music to penetrate backwards; This would lead to walking in the same size. “Once at the Bloemencorso we took the lead,” Nelis Smit remembers, “and it started to catch the rain. We did not know if we could stop and so we continued. On the track at the Weteringschans we walked through twenty centimeters of water. The drummers could no longer drum and began singing in march tempo: Hannes runs on clogs, simpe sampe sompe. In the stadium we noticed that we were the only corps that had come out of the march. We could wring out the socks, and when we took off our blue uniforms, we saw that our underwear had turned completely blue. ”